On Friday 13th November 1931 the plane took off from Port Elizabeth for Cape Town. About 30 miles from Cape Town the plane encountered a terrific gale over Sir Lowry´s Pass. The force of the gale ripped off one of the wings and at 12:55 the plane crashed violently on the slopes of the mountain and burst into flames.

Early newspaper reports said that all the mail was lost in the crash. But later a few bundles of mail which had escaped the fire were found. These were conveyed to the Central Post Office, Cape Town where the Return Letter Office took care of the around 600 identifiable items. These postal items, all more or less in a charred condition, were then forwarded in a service cover with an explanatory note enclosed. It seems ad if most of the recovered items were returned to the sender and not forwarded to the recipients.

The South African Department of Posts & Telegraphs produced an explanatory note which was enclosed with the forwarded or returned items.
It is mentioned that these notes where made by typing the wording three times on a sheet and then cutting them apart. In one case the year 1931 was typed as 1913.
I have recorded at least 6 different variations of these notes (three with year 1931 and three with year 1913). 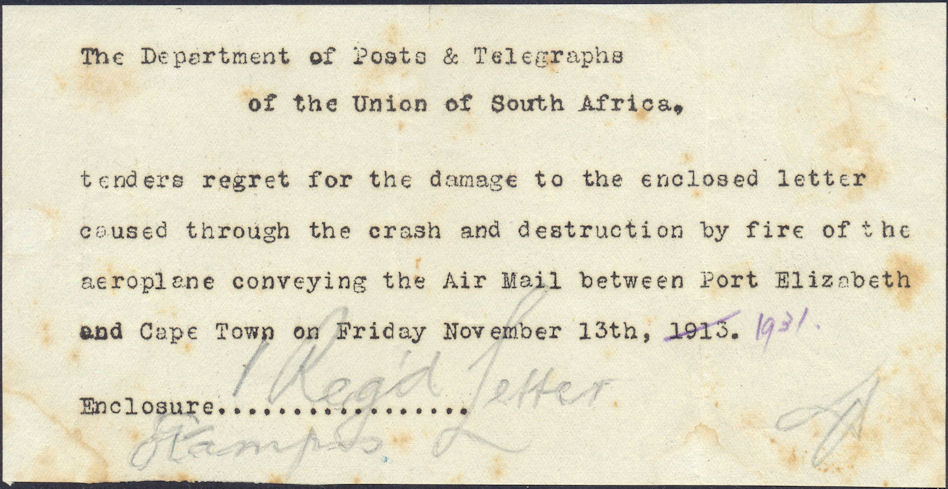 Only one example is known.