The plane which was registered to British Continental Airways but operated by British Airways (with whom they were in the process of amalgamation) crashed shortly after takeoff from Gatwick airport. It was a fine but slightly misty night when the aircraft took off at 22:09 in the course of a scheduled mail and freight run to Hannover via Cologne. Instead of straightening up onto the correct course, the plane continued turning left while losing height, and it then crashed into a field just outside the airport boundary and burst into flames.
The crash investigation concluded that the wireless operator’s left shoe had become trapped between the left end of the 2nd pilot’s rudder bar and a fire extinguisher. The pilot could not operate the rudder, and the wireless operator couldn’t remove his foot from where it had become wedged.

From 1934 the mail connection between Great Britain and the Nordic countries was much improved. A night-route operated Helsingfors-Stockholm-Copenhagen-Hannover-Amsterdam with connection in Hannover to the route Berlin-Hannover-Cologne-London. This route operated until the outbreak of World War II.
Mail from this accident is not mentioned by Nierinck, and very little mail is known.
The only items I have seen are 2 covers addressed to Denmark and 6 covers addressed to Sweden.
In Sweden the mail was forwarded with a special label.

Swedish label.
Size textblock:
126 x 70 mm.
Text translation:
This letter has been damaged in an accident with a mail-carrying airplane.

The size of the labels vary as they were printed on large size paper and later cut from these sheets. 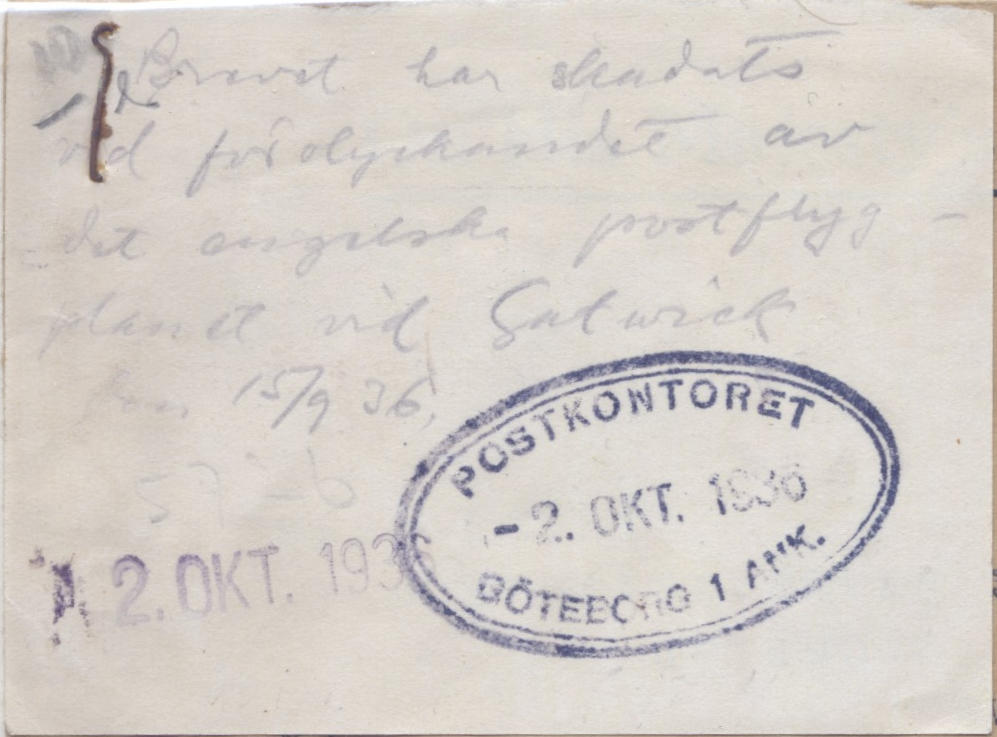 Translation:
The letter has been damaged
in the crash of the English mail plane
at Gatwick on 15/9 36

Probably used on mail returned to the senders.

Used in London on Transit mail.