The flying boat came in for landing at 18:35 – almost 4 hours after the departure from Horta and 15 minutes ahead of the estimated arrival time. Since official sunset was at 18:20 Pan Am’s ground crew at Lisbon had set out as usual a string of landing lights, indicating that the landing was to be made from south to north. On the landing approach the plane made a descending turn to the left and the left wing tip skimmed along the surface of the water, dug in and the plane crashed into the river at 18:47. The wreck remained partially submerged for approximately 10 minutes and then disappeared below the surface of the river. The Pan Am launch, which had been standing by for the landing, proceeded to the scene of the accident and began rescue operations 10 minutes after the crash. The Pan Am launch was joined by a BOAC launch (British) and another Pan Am launch arrived approximately 10 minutes later.

The plane carried 93 bags of mail from North and South America and also some mail from Africa. The mail was destined for various European countries. I have recorded quite much mail for Sweden. As Denmark and Norway were occupied by German forces, not much American mail from this period can be found. The postal connection between Denmark and the United States, South and Central America was closed in December 1941 (after Pearl Harbor). From 3 March 1942 the postal connection with Argentina and Chile reopened. Chile was closed definitively from 19 February 1943 and Argentina from 7 February 1944.

Number of items in my records:

The salvaged mail was in watersoaked and damaged condition and were forwarded with a wide range of local markings (handstamps and labels).
From my study it seems as if most of the Swedish mail was forwarded from Portugal to Sweden via England. Many items show British censor labels, but these could very well have been applied at Bermuda where over 1.000 British censors were working. Censor labels from Bermuda should be marked I.C., but many other types of labels were used as well incl. manuscript I.C. A few items were forwarded via the London Office for damaged mail and show one of their handstamps. Some items were forwarded via Germany where they were censored in Berlin (Auslandsbriefprüfstelle Berlin ).

The Swedish Post produced a small label which was used on all mail. The Swedish text can be translated to “Enclosed item has been damaged by water in the crash of a Clipper-machine on the Tagus river outside Lisbon on 22 Feb. 1943”. This label was used on all the mail which arrived in the first batch, and which was forwarded from Stockholm on 8.3.1943. Later more batches of mail arrived, and as there were no more labels available a second edition was printed. This label had an extra textline “The stamps have in general fallen off”. These items were forwarded from Stockholm on 14.3., 16.3., 17.3. and 22.3.1943. 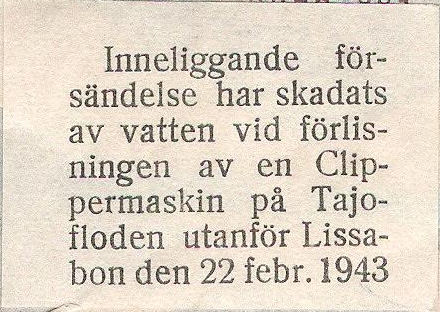 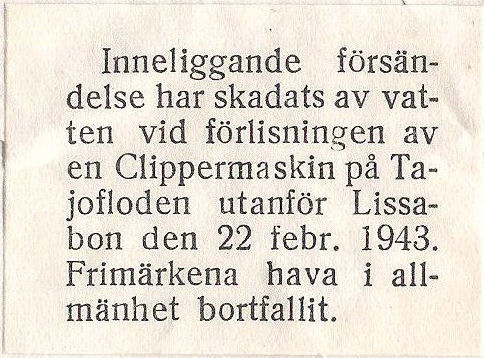 Swedish label.
Black printing on white paper.
Size: 40 x 30 mm.
As above but extra text at the bottom.

Service Covers
I have recorded different types of Swedish service covers with mail from this crash. A more detailed study is under way.