During World War II regular services both within and to/from the occupied Norway were operated by the German company Deutsche Lufthana. During this period the company sometimes used planes “borrowed” from occupied countries. One of these was a DC-3 belonging to the Czech company Ceskoslovenska Letecká Spolecnost (reg.no. OK-AIG) which from 24 July 1940 served for Deutsche Lufthansa as D-AAIG.
On 21 April 1944 the plane was flying up Oslofjord on its trip from Berlin via Copenhagen when a signal cartridge exploded in the cockpit and started a fire. The pilot decided to make an emergency landing in the sea near Vesterøy just outside of Fredrikstad, Norway. The plane sank shortly after hitting the water.

The plane carried mail from Europe to Norway. I have only recorded 16 items from this crash which could indicate that only a small part of the mail was salvaged.
So far I have recorded mail from Belgium, Denmark, Germany, Hungary, the Netherlands, Portugal and Switzerland.
The salvaged mail was brought to the Oslo Post Office, where it was forwarded to the recipients with a label.

The Oslo Post Office produced labels to be used with mail that was forwarded to the recipients. The labels explain that the mail was damaged in an air crash.
The size of the labels vary as they were printed on large size paper and later cut from the sheets.
I have recorded 6 different labels.

Size textblock: 77 x 38 mm.
As above, but budafdelingen with small “b and comma after postkontor. 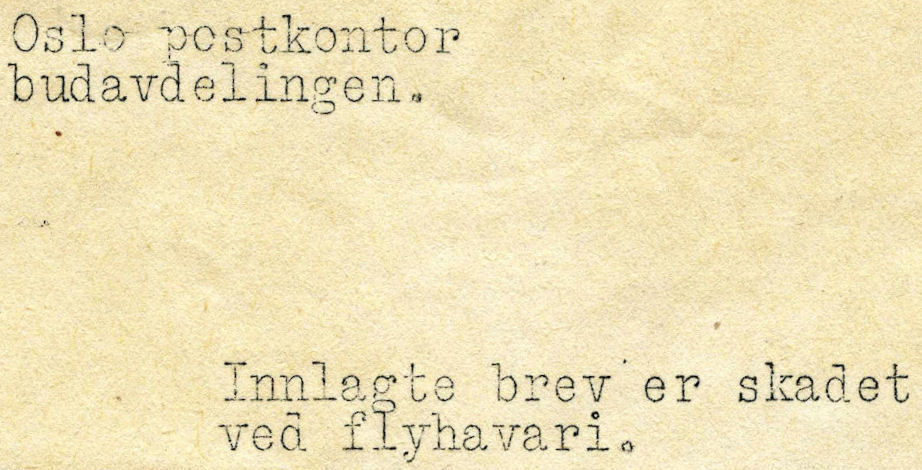 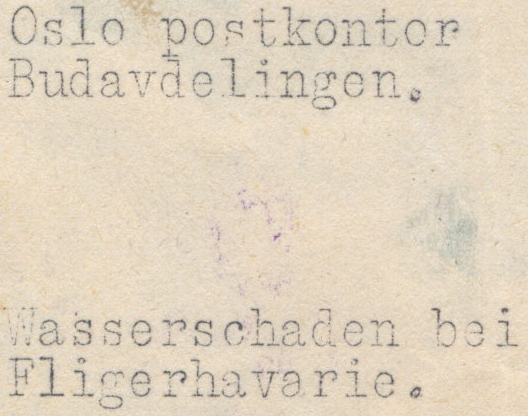 This label was used on mail which was returned to the sender.