The plane was on a flight from Gander airport, Newfoundland to Mitchell Air Force Base, Long Island with an intermediate stop at Westover Air Force Base where is was to land at 20:27. While descending to Westover, the crew encountered poor weather conditions with low clouds and thunderstorm activity, and they circulated around for almost two hours waiting for better weather. At 22:20 on final approach and flying at a height of 800 feet the plane slammed into the southeast slope of Mount Tom about 8 miles northwest of the airport.
Among the pasengers were 15 U.S. Coast Guard members who were on their way back home from duty in Greenland.
It seems likely that the plane actually started the flight from the U.S. Army airfield Bluie West One (BW-1), Narsarsuaq, Greenland with first stop at Gander.

According to reports several letters were scattered around the crash site.
Until recently no such mail has been recorded, but now one cover has come to light. 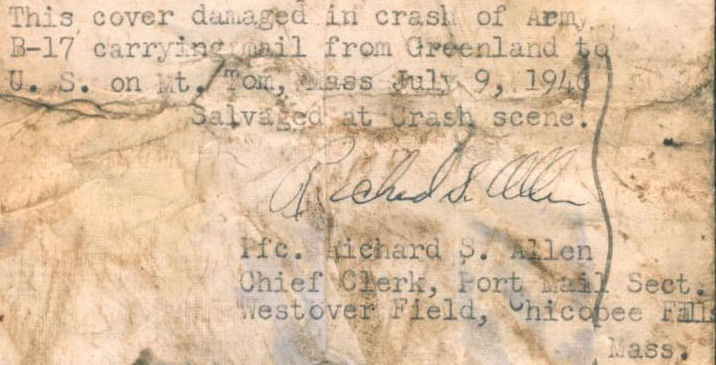