The weather in the area around Trondheim was bad as the flying boat came in for landing in the bay of Hommelvik. When the plane was about to touch down on the water, it was hit by a wind gust, the pilots lost control and the right wing float broke off as it hit the water. The plane rolled over to the side and its nose ploughed into the water. The fuselage rapidly was filled with water and sank to a depth of 43 meters.
On the 10. October the flying boat was lifted and pulled into shallow water.

Most of the mail was recovered and taken to Trondheim post office. As the mail was watersoaked it had to be dried before further processing. The post office used a couple of special handstamps and very often the covers were also sealed with a label ”POSTOBLAT”. 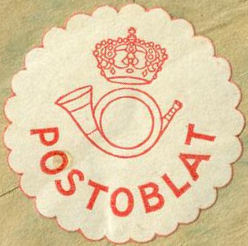