The plane took off from London/Northolt Airport at 17:25 on a flight to Dublin. At 19:12 the crew reported they had reached the Nefyn area and they would descend from 6500 ft to 4500 ft. This was the last radio contact with the plane. The descending plane was caught by severe downdraughts on the lee side of Snowdon mountain which forced the plane down into an area of very great turbulence. The crew lost control of the plane, a part of the starboard wing broke off and at 19:15 the plane crashed into a peat bog some 18 miles off course. The plane caught fire and was completely destroyed.
The exact cause of the crash was not determined.

The plane carried 6 bags of mail (2 from Copenhagen, 1 from Malmö, 1 from Gothenburg, 1 from Geneva and 1 from Frankfurt/Main). Among the mail was 13 registered letters.
According to a note in “The Revealer” all mail was salvaged except the bag from Geneva (One postcard from Switzerland is actually known). Most of the mail was badly torn, partially burned and damaged by water.
The mail was brought to Dublin for further processing. The Post District Dublin (Post-Cheanntar,  Baile Átha Cliath) produced labels which were attached to the covers and cards.
The first part of salvaged mail was forwarded on Monday the 14 January with the label type A. The same procedure was followed on 15 January. No mail was forwarded on 16 January.
It is assumed that Aer Lingus protested against the Post Office using labels mentioning the airline’s name and the name of the airplane. The text on the label was changed – see type B, and the last mail forwarded on 17 January show this label. The label type A is more common than the label type B (12 / 4).

So far I have recorded 16 items from this crash (4 from Denmark, 11 from Sweden and 1 from Switzerland). 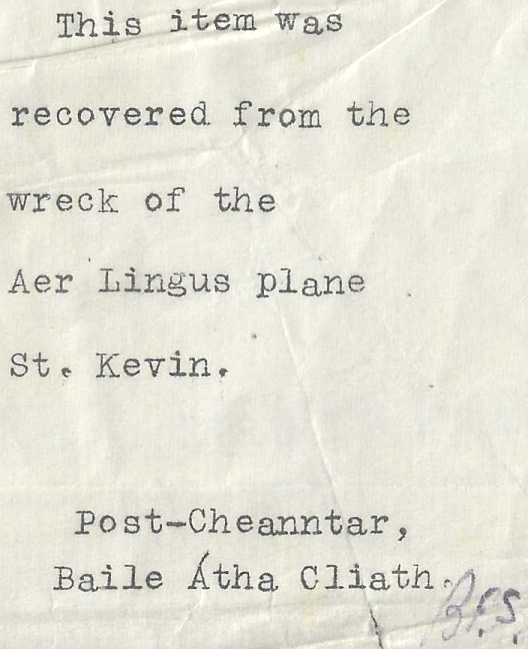 The first “T” starts over “c” in the second line. 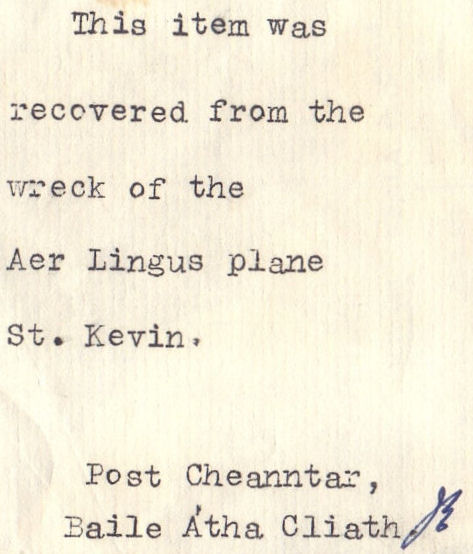 The first “T” starts over “o” in the second line. 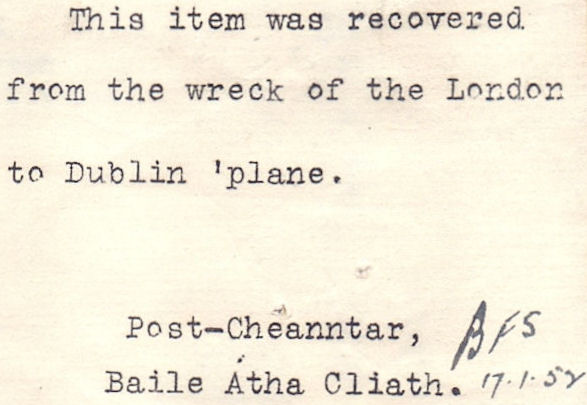 The first ”T” starts over “m” in second line. 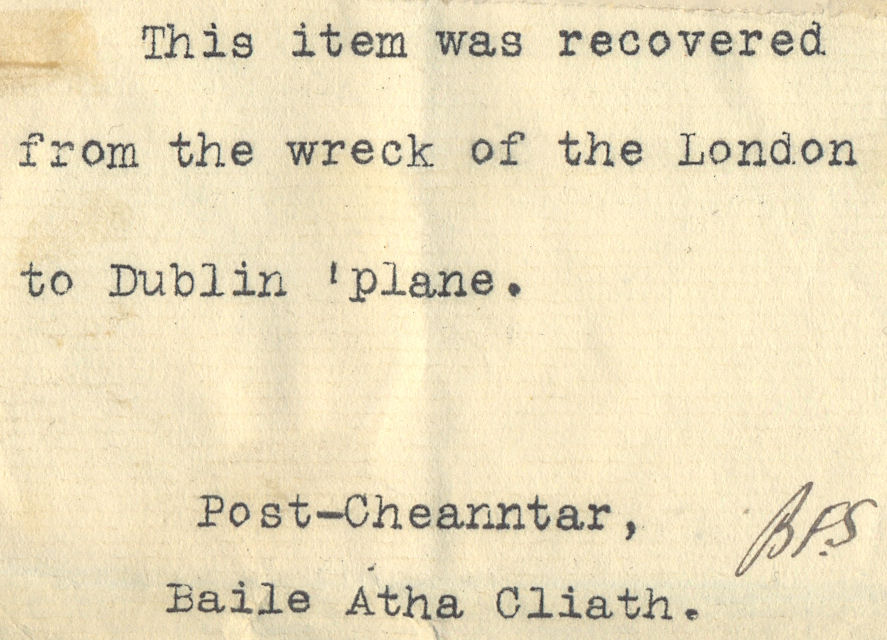 The first “T” starts over a gap in the second line.

The size of the labels type A and B vary as they were printed on large size paper and later cut from the sheets. The labels were always tied to the covers or postcards with the resealing label type C shown below.

Recorded with postmark DUBLIN 6 with dates 14 JA, 15 JA or 17 JA 52.
This postmark was most certainly used for special purposes only in the General Post Office in Dublin. The origin of the postmark went back to the 1910s or early 1920es when English postmarks were used.
The labels were postmarked before they were attached to the items.
I have seen one cover were the label was postmarked  BAILE ÁTHA CLIATH  2  14 JA 52 after the label was attached to the cover.