The mail plane from Copenhagen took off from Kastrup airport at 05:23. As the plane approached Rønne the control tower lost radio contact with the plane. Last contact was at 06:03. Rescue Coordination Centre (RCC) Karup was alerted, and they sent a Catalina plane from Aalborg. From Rønne harbour departed the rescue vessel “Jens Væver” the Navy vessel Y 337 and the Home Guard vessel MHV 63. After a few hours, debris, mails bags etc. were found and brought ashore. The search continued the following days and more debris and newspaper mailbags were brought ashore. The wreck was located the following day on a position 7 nautical miles west-northwest of Rønne in 40-50 meters deep water. Several attempts were made to salvage the wreck but without success.

On board the plane was 298 kg mail and newspapers. Much of this could be recovered the same day. “Jens Væver” came into the harbour with a mail bag with 300-400 letters to addresses outside Rønne, and the Home Guard vessel recovered the mail bag with valuable letters (12 registered letters, one express letter and one express parcel) and also a large bag with newspapers. A mail bag with 350-400 letters (9 kg) to addresses in Rønne was still missing. Due to the stay in the water the items were often soaked and stamps had fallen. The items were dried at Rønne Post Office and from here the items were forwarded with a handstamp (type A).
On 13.6. the local fishing boat “Jonna Lund” got a bundle of mail in the trawl. The bundle came from the missing mail bag with mail to the Rønne area. The bundle had been in the sea for more than 4 months, but the letters and post cards were in surprisingly good condition, as they were bound together very tightly. Of the123 items in the bundle 122 could be forwarded to the recipients. Only one cover was impossible to read. The mail was forwarded from Rønne Post Office on 24 June with an explanatory letter (type B).

Many of the larger post offices in Denmark had a handstamp to be used on mail which for some reason was damaged. This handstamp is not made specially for this air crash. 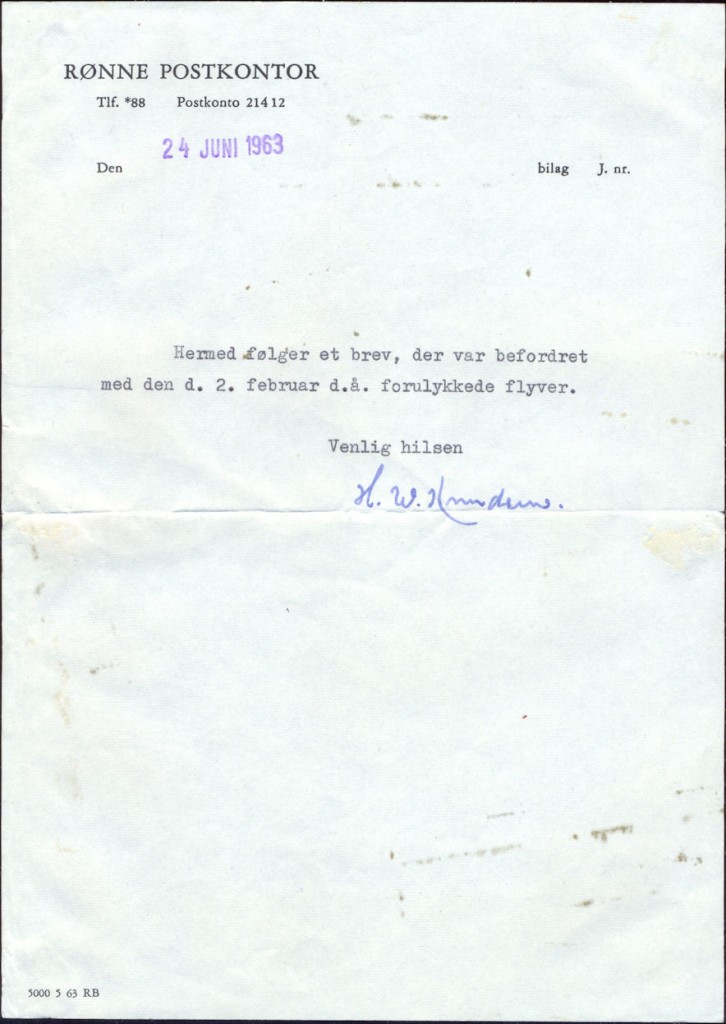 Text translation:
Here is a letter which was carried on the crashed plane on 2. February. Sincerely  +  signature.