Early Sunday morning at 05:45 the plane was ready for takeoff.  After rolling 50 meters a failure in one of the engines caused an explosion. One of the fuel tanks got damaged and the leaking fuel caught fire. The crew and all the passengers escaped from the plane – some with minor injuries. The plane completely burned out mainly because it took the firetrucks 12 minutes to arrive.

Onboard the plane was mail from Asia destined for Europ and the United States. Due to the fierce fire most of the mail was pretty damaged.
The recovered mail was handed over to the Italian Post for further processing. This took quite a while as the forwarded mail arrived at the destinations mostly in late June and even as late as September 1970.

I have recorded 11 items addressed to the Nordic countries:

Apart from these items mail is also known addressed to Germany, Switzerland and United States. 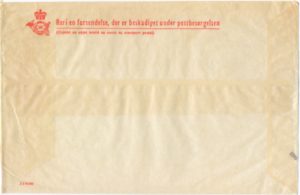 Translation:
The attached item has unfortunately been damaged when a SAS plane on April 19, 1970 burned up at the airport in Rome.
Postal Complaints Office

The cover is neutral except for the type number printed on the backside – see two images below.