At 23:18 the plane was cleared for takeoff. On its way out of the runway the stall warning system was activated. Although the speed already had increased to 140 knots, the pilot decided to abort the takeoff. The remaining 1100 meters of the runway was not enough to bring the plane to a stop. The plane continued out into the ice covered Oslo firth where it came to a halt. All occupants were immediately evacuated and 20 minutes later the plane broke through the ice and sank in 10 meters of water. The plane was raised and hauled ashore on 4th February.
It appeared that this particular plane had suffered from false stall warnings a couple of times during the past few days.

On board the plane was 1207 kg mail including newspapers etc. destined for the Troms and Finnmark counties. Some of the mail was recovered during the first  24 hours, and the rest was brought in on 4th February when the plane was raised and hauled ashore. The mail was partly dried at the post office at Oslo airport and then sent to Tromsø post office. The first mail to arrive here was the mail for Finmark which was forwarded immediately further up north. When the mail for the Tromsø postal district arrived the mail was sorted and dried until it could be sent out to the recipients. The first items were sent out without any further notice, but later a special handstamp was used (see type A. below).
According to an interview with the postmaster at the post office some of the mail was so much damaged that it had to be forwarded in a service cover with an enclosed explanatory note. I have so far not seen any examples of this note.
I have not seen any mail for the Finnmark district. As no handstamps, labels etc. was used here I guess no one has kept these plain curled items without any stamps. 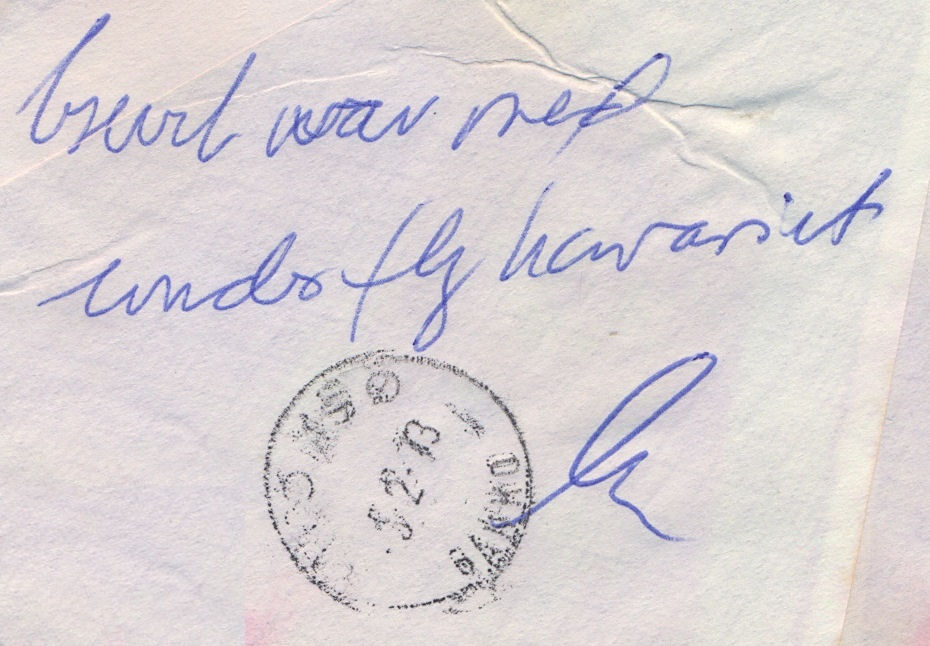 Manuscript note.
Brevet var med under fly havariet (The cover was in the plane crash) + postmark TROMSØ  BANKO 5.2.73 and initials.