Shortly after take off from Nairobi the crew felt vibrations. The captain, suspecting wheel imbalance, raised the gear. A lack of acceleration forced the crew to lower the nose in order to maintain airspeed. The Boeing continued to descend however and at 07:54 the plane hit the ground 1120 m past the end of runway 24 and struck an elevated road a little further on. The aircraft broke up and caught fire before coming to rest 454 m past the initial point of impact.
The accident was caused by the crew initiating a take-off with the leading edge flaps retracted because the pneumatic system which operates them had not been switched on. This resulted in the aircraft becoming airborne in a partially stalled condition which the pilots did not identify in the short time available to them for recovery. Another factor was the lack of a warning of a critical flap positions.

On board the plane was mail destined for South Africa and Botswana and sent from a wide range of countries in Asia, Europe and Africa.

A part of the mail was recovered. Contemporary newspapers talk of 10.000 letters being recovered – most of the mail came from Germany.
The South African Post applied a special handstamp on all the recovered items.

For unknown reasons a few items were returned to the senders via Germany. Two different handstamps were used – see below E + F.

As to Nordic mail I have recorded the following number of items:

Probably more identical handstampe were produced, as they appear in a variety of colour shades.

As mentioned above a few items were returned to the senders via Germany. These items were handled at the “Luftpostleitstelle” at the Köln/Bonn airport.
Returned mail is rare and I have only seen one Swedish cover (see below) and a cover from Singapore. 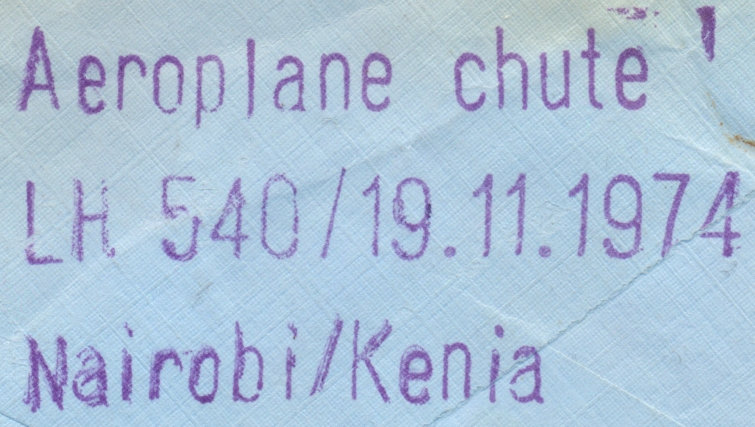 The text is rather strange.
“Aeroplane chute” sounds French (airplane falling) ?
But “Kenia” is German for Kenya. 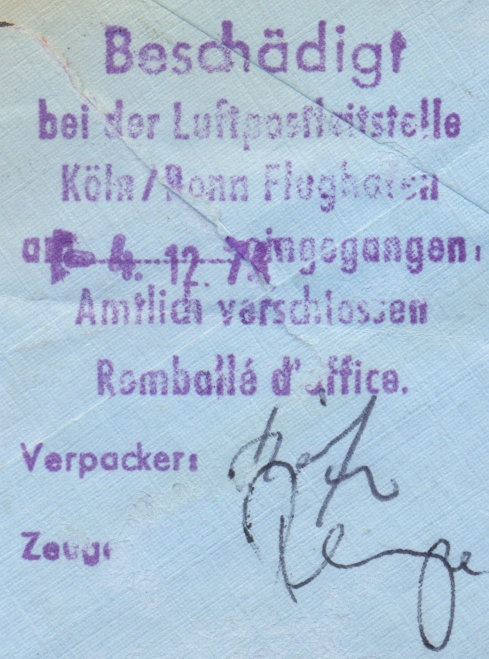